Which Side Will We Choose?

The Kiss of Judas by Jean Bourdichon 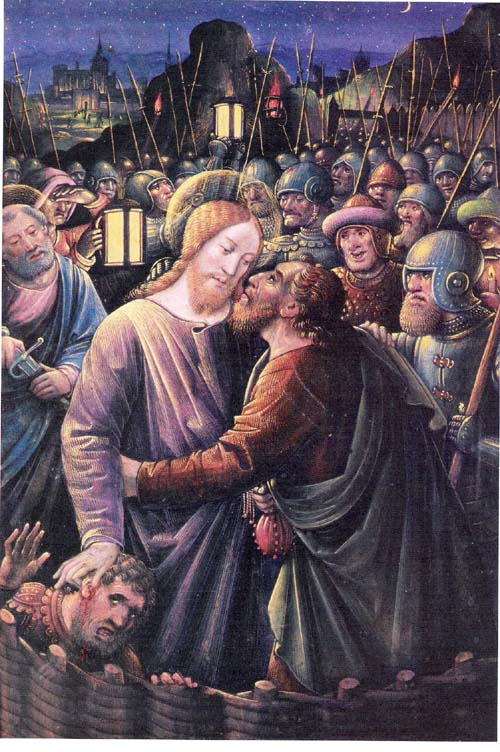 This is a painting rich in color and activity. It has one central action and then three others going on around it. The central action is Judas's betrayal of Jesus Christ. With his right hand clutching his money bag of thirty silver coins (the prize for the betrayal) his left hand reaches to embrace Jesus. The faces of the two men are in stark contrast to each other.

Judas is rough, ruddy and has a look of anxiety on his face. Jesus in contrast looks almost lit up from the inside. He is calm and serene while he looks sadly at his former disciple.

Judas has chosen sides and it is not with the Lord. The artist has painted Judas without the halo shown over Jesus and Peter. Scripture says that Satan had entered into Judas which means Judas had let him in. Satan cannot come inside our body unless we let him in. By choosing sin, Judas had let him in. And thus he was able in an act of treachery to betray the Lord he had followed for three years.

From the central act of betrayal our eye takes us to the lower left where almost casually Jesus is healing the ear of one of the soldiers maimed by Christ's disciple Peter. It is a clear statement to the mournful Peter that violence is not the way of God. Peter standing behind Jesus has an agonized face as he puts his sword back into the sheaf. Events are happening that he is powerless to change. All this seems to be dawning upon him.

Finally, there is the action of the mob of soldiers. Their faces are rough, ugly and bloodthirsty. Oddly, as they push against one another to take Jesus you don't sense that the mob is in control. Jesus will not be taken. He will choose to go with them. He is the one in control of this scene.

Jesus stands central in all this activity. He is calm and settled that His Father is ultimately in control. Love, not hate, will win the hearts of at least some of these people. His compassion and divinity shine through the horrible circumstances of this moment.