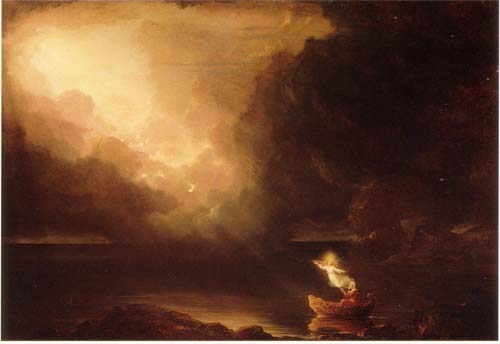 This is the fourth of the Thomas Cole Voyage of Life series. There has been childhood, youth, manhood, and now old age. In the manhood painting, our man was standing in his boat and praying as he was heading for a waterfall drop off. The angel was far behind him as he headed into the dark churning waters.

But now the man is old. He is still praying but this time he is seated in his boat and the angel is alongside and in front of him pointing the way. The scene is one of rest. The waters are still as the boat glides along. Like the last picture of manhood, you can see a clear divide between what looks like two worlds. The world close at hand looks dark and foreboding especially as you look at the churning clouds. But straight ahead and up through a hole in the clouds we view a glimpse into the heavens.

There is a direct line of light streaming from the heavens to the old man's boat. The angel guiding him points the way clearly and if you look in the direction the angel is pointing you see it is to another angel that hovers at the precipice of heaven.

The time is short now for the last leg of the journey and our man has learned to sit down and be dependent on another to guide him. He is at rest and there is a bright eternity ahead. Why has it taken him so long to sit down and be guided?

"There is a special rest still waiting for the people of God. For all who enter into God's rest will find rest from their labors just as God rested after creating the world." Hebrews 4:9-10

If we are willing to stop our feverish pace and listen for the footsteps of God then He has a resting place for us as we glide to a perfect end of a life well-lived.