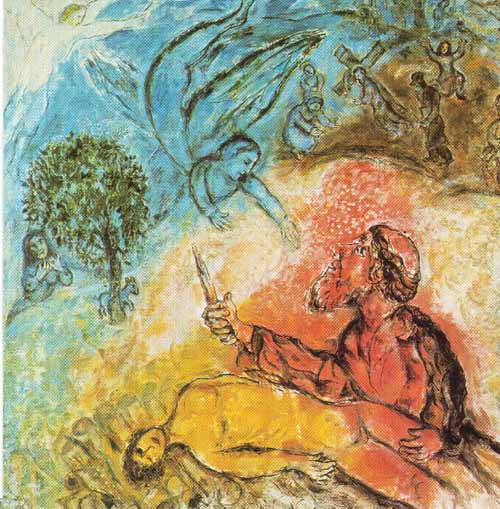 The first glance at this painting gives you a feeling of a folk art picture. There is no perspective and no division between Heaven and earth except for a color line. Sizes and shapes are skewed. But Chagall paints a pivotal moment in the life of Abraham that mimics a distant moment in the life of Christ.

Isaac's docile, naked body likes draped at an angle over stacks of wood. Just moments before, he had asked his father where the sacrifice was and Abraham had answered that God would provide.

The colors on earth's half of the picture are vibrant and intense. Abraham burns with intensity, colored in red as is Isaac's lower body. Perhaps he is hot with fright and bewilderment. Why would God tell him to sacrifice Isaac his only true son?

Isaac's body is already a death like yellow color. He doesn't move or fight. He trusts his father just as Abraham is trusting his Father in Heaven. They are two men resigned to the intensity of the moment.

Now look at the the upper third of the picture. The colors are a calming but vibrant blue moving toward brown. There is no alarm in Heaven. God knows how to rescue His godly ones. At just the right moment one of God's angels crosses the divide between Heaven and earth. An arm reaches down to Abraham --"Stop!"

Abraham has passed the test. God knows that everything that Abraham has, including his only son Isaac, belongs to Him - the Lord of the universe. Abraham has held nothing back. ".....now I know that you fear God, because you have not withheld from me your son, your only son." (Genesis 22:12b)

Abraham's obedience has given God's children down the centuries the courage to obey in even the hardest times. Abraham was sure that God would provide. and there in the distance we see a ram stepping out from behind a tree at the same time the angel reaches down to stop the killing. So too, it's while we are obeying God that God will provide for us. He may not be early but He is never late.