The Importance of Listening

The Declaration of Independence by John Trumbull 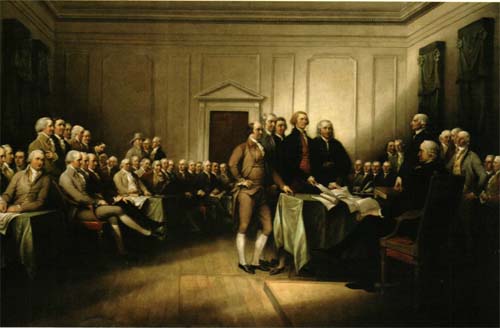 When America was in its infancy a group of lawmakers and statesmen met to draft a document called The Declaration of Independence. The colonies in America had suffered tyranny under Great Britain and were in the middle of a bloody revolution to win freedom for its people.

This is the background for this painting. As important as this document was and is to our country it's not this that makes this picture so telling. First we see that 48 men are assembled and all of them are in order and respectful of each other. The chairman of the assembly sits at the head of the room and respectfully listens to his five colleagues standing before his desk.

There is no undue talking going on in the room because the men are listening to the proceedings. The semi circle arrangement of chairs lets the men see each other and extend the courtesy of attentiveness to their colleagues. It is this attitude of listening that produced such a great document.

You might think it came about because there was a lot of talking, personal opinions and arguments won and lost. But I believe that the real work these men did was to listen to each other.

Every mind is preset with our own thoughts, opinions, and judgments. But it's the mind that is open to the footsteps of God that allows for truth and righteousness to come forth. If we have learned to listen to God then we are also able to listen to men. But, if we "know-it-all" then we'll miss what God and others have to say. All big ideas have come because we've listened first.