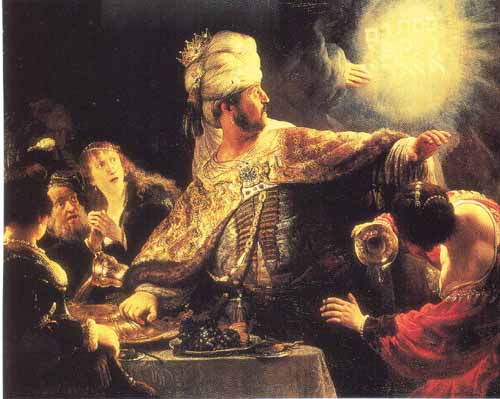 This colorful, active painting by Rembrandt is an illustration of history at the time of King Belshazzar of the Chaldeans (recorded in Daniel 5:1-31). Belshazzar wanted to throw a grand party for a thousand of his lords and ladies. In the course of the event he got the idea to send for all of the gold and silver vessels used by the Jews in the great temple in Jerusalem.

The Jews were captive in his land which began under his father King Nebuchadnezzar. All of their sacred vessels had been put into storage. Why not use these fine dishes for this grand occasion? So, the dishes were brought in and while they are feasting with them they also praised the gods of gold, silver, bronze, iron, wood and stone. And with this double mockery God decided He had had enough.

Suddenly, a man's hand appeared and wrote on the wall so that the king could see it! It is not clear whether the others could see the hand (as they are all watching the king reeling back in surprise and terror) but everyone could see the writing. Yet, while they could see the writing, they could not read it. King Belshazzar called for all the enchanters and soothsayers, diviners, and astrologers to translate but they could not. Why? Because enchanters, soothsayers, diviners and astrologers work in Satan's realm. This writing was from God. A man of spiritual discernment was needed.

At the recommendation of the Queen Mother, Daniel was called for. He is described as having the Spirit of God and during King Nebuchadnezzar's reign had been appointed over all the magicians, enchanters, soothsayers and astrologers. Daniel's reputation was of having an excellent spirit and wisdom to interpret dreams.

Daniel reminds the king that his father was given a great kingdom along with glory and majesty. He did what he wanted until his heart became so prideful and hardened against God that he was driven out to live among wild animals until he finally learned that it is the most High God that rules in the kingdom of men. Now Belshazzar knew all this but did not humble his own heart. Instead he defiantly ordered God's sacred vessels to be used.

Only three words were written and one of them twice for emphasis. Mene, is the word used twice and means -- God has numbered the days of your kingship and brought them to an end. The word tekel means -- you are weighed in the balance and found wanting. Finally the word peres meant -- your kingdom and kingship are divided. That night Belshazzar died and Darius the Mede took the kingdom.

When God speaks He does not need a lot of words. He gets right to the point. We might believe in God and even say that we know Him but are we living as if God wasn't watching? In our living are we mocking the God who made us by: taking His name in vain? or joking about sacred things? or defiling what is holy (our own bodies) by crass thinking and actions?

God is patient and long suffering with us. But if we keep on mocking Him there will come a day when we will also see the handwriting on the wall. It may come a different way than happened to King Belshazzar but it will come.

"Do not be deceived: God cannot be mocked. A man reaps what he sows." Galatians 6:7