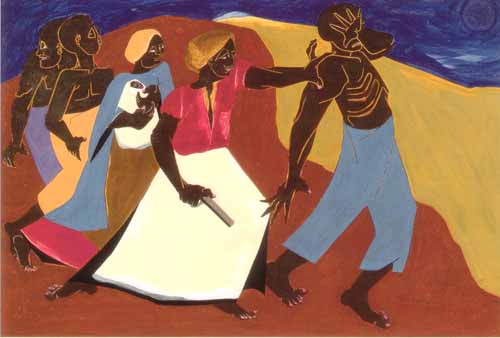 This is an unusual painting of a large black man being driven forward by a black woman holding a gun on him. The background is divided into three parts. There are the earth tone rusts, the yellow of daylight and the navy blue of dark night. He is being forced to move through the daylight and into the night. The captive is gripped with fear, anxiety and dread shown by the hiding of the face, the extended fingers and tense body posture.

Behind the lady with a gun walk a woman with a child followed by two men. It's a forced march for all of them especially the captive. The threat of death is real with the gun behind him, yet the path he's being pushed towards overwhelms him. We'd say today that he is "caught between a rock and a hard place." He can't go back because he faces a gun but he dreads going forward.

Isn't that how many of us live our lives? We are on a forced march. There is no option to go back and yet we dread what is ahead of us. Fear grips our daily life as we are run by other people "holding a gun on us!"

If this describes you then stop dead in your tracks and listen. The Lord says to you and me, "I know the plans I have for you. They are plans for good and not for disaster, to give you a future and a hope." Jeremiah 29:11

But how do I get out of my bondage and into God's hope? The answer is found in the next verses of Jeremiah 29. "In those days (the days when Israel was captive to Babylon) when you pray I will listen. If you look for me in earnest, you will find me when you seek me. I will be found by you, says the Lord. I will end your captivity and restore your fortunes." Jeremiah 29:12-14a

The God of the universe tells us plainly how to stop the forced march of fear and death. We are to call out to Him (pray) and seek Him in earnest for that future and hope that He has for us. He will be found by you and that's a promise!