Are You Following a Blind Guide?

The Blind Leading the Blind by Pieter Bruegel the Elder 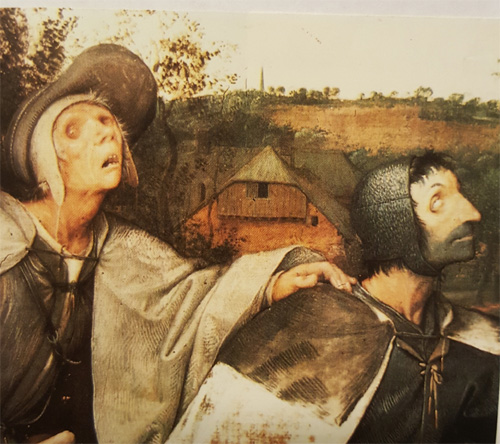 We see two blind men walking along the road together. The first man who is leading looks awake and confident. He walks as though he can see -- but he can't. Does he know where he is going? Maybe, but maybe not.

The man following has his hand on his friend's shoulder. His face tells us he is lost and clueless about his direction -- except to hang onto his friend and go where he goes.

It's a pathetic scene really but one that we see almost daily without realizing it. We may even be part of it. There are some who can fake confidence. They talk as though they know what they are doing and where they are going, but they don't. They are as blind as the men in this picture.

But being confident, speaking with authority and having the air of leadership sets them up for others to follow who lack confidence and vision of their own.

If some can fake leadership there are many more who are glad to follow without asking the important question: "Do they know where they are going?"

At the time that Jesus lived there was a group of religious leaders called Pharisees who other Jews looked up to. They were the trendsetters when it came to religion. They were pompous, confident and had all the appearance of knowing where they were going -- but they didn't and Jesus called them out.

"You hypocrites -- you honor me with your lips but your heart is far from me!"

Then Jesus warned his disciples NOT to follow these blind guides because if one blind guide leads another they will both fall into the ditch.

Are you following someone who only appears to know where they are going? Stop following until you are certain of your own direction.

Our Father in Heaven has a plan and purpose for your life and He will be glad to show you that way if you'll stop following blind guides and look up to Him for direction.